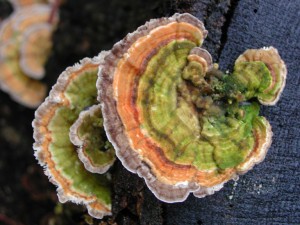 Coriolus versicolor (Trametes versicolor) is not an edible mushroom but it has been used in traditional Chinese medicine for therapeutic effects as a tonic for thousands of years. Traditionally, the extracts were derived from whole fruit-bodies. Today two compounds, PSK (polysaccharide-K) and PSP (polysaccharide-peptide) are purified from this mushroom by deep tank fermentation of the mycelium using a variety of strains. PSK (Krestin) was first isolated in Japan in the late 1960s while PSP was isolated about 1983 in China. Each compound has shown remarkable immune boosting properties with few side-effects. Remarkably by 1987 PSK accounted for more than 25% of total national expenditure for anti-cancer agents in Japan.

In 1960-70s, Japanese scientists were the first who did research on Coriolus versicolor employing modern technology, and successfully extracted a polysaccharide (PSK) from the CM-101 strain. PSK is patented and proven that it can effectively enhance immunity of human body. In 1965, PSK is used in human trials for various cancer treatments with successful results.

In 1977, Japanese Ministry of Health & Welfare approves PSK as the first polysaccharide antitumor drug from mushroom (Class IV Medicine) and an adjuvant treatment for cancer regimens.

In early 1980s, an expert team led by Prof. Q.Y. Yang of Shanghai Normal University conducted extensive research on over 100 strains of Coriolus versicolor, identified and extracted a polysaccharide-petide (PSP) from the deep cultivated mycelium of COV-1 strain. PSP is known in China as Yun Zhi Tang Tai Jiao Nang. Scientific tests showed that the effectiveness of PSP was even better than PSK, which was then a popular medicine in Japan for treatment of cancer patients. When news hit the street, PSP immediately gained interntional attention. Dr. Yang also received a patent for his invention of Coriolus versicolor PSP extraction process.

In 1989, The First Coriolus Versicolor PSP International Conference was convened in Hong Kong.

1991-92, stage I, II and III double-blind randomized placebo-controlled clinical trials were conducted through 24 specialist hospitals with more than 1,100 cancer patients in major cities in China. The clinical trials proved the efficacy of using PSP in complementing radiotherapy and chemical treatments of patients suffering from various type of cancer; and the subsequent registration of “Coriolus versicolor PSP” as a new medicine was approved by Ministry of Health in China.

In 1993, The Second Coriolus Versicolor PSP International Conference was convened in Hong Kong.

In 1999, The Third Coriolus Versicolor PSP International Conference, titled “Advanced Research in PSP” was convened in Hong Kong. In the same year, a double-blind randomized placebo-controlled clinical trial was conducted by University of Hong Kong in Queen Mary Hospital using PSP to complement radiotherapy and chemotherapy treatment of patients suffering from lung cancer. The results again proved the efficacy of “Coriolus versicolor PSP”.

In 2011, Queensland University of Technology clinical study has found Coriolus versicolor to be 100 per cent effective in suppressing prostate tumour development in mice during early trials.

From 2011 to now, there are significantly more research and clinical studies completed and PSK & PSP are more recognized in the western world.

You can buy ready made Coriolus versicolor product or other medicinal mushroom derived products from: https://mushroomremedy.com/product/pro-immune-gold/. All their products are made in the USA.